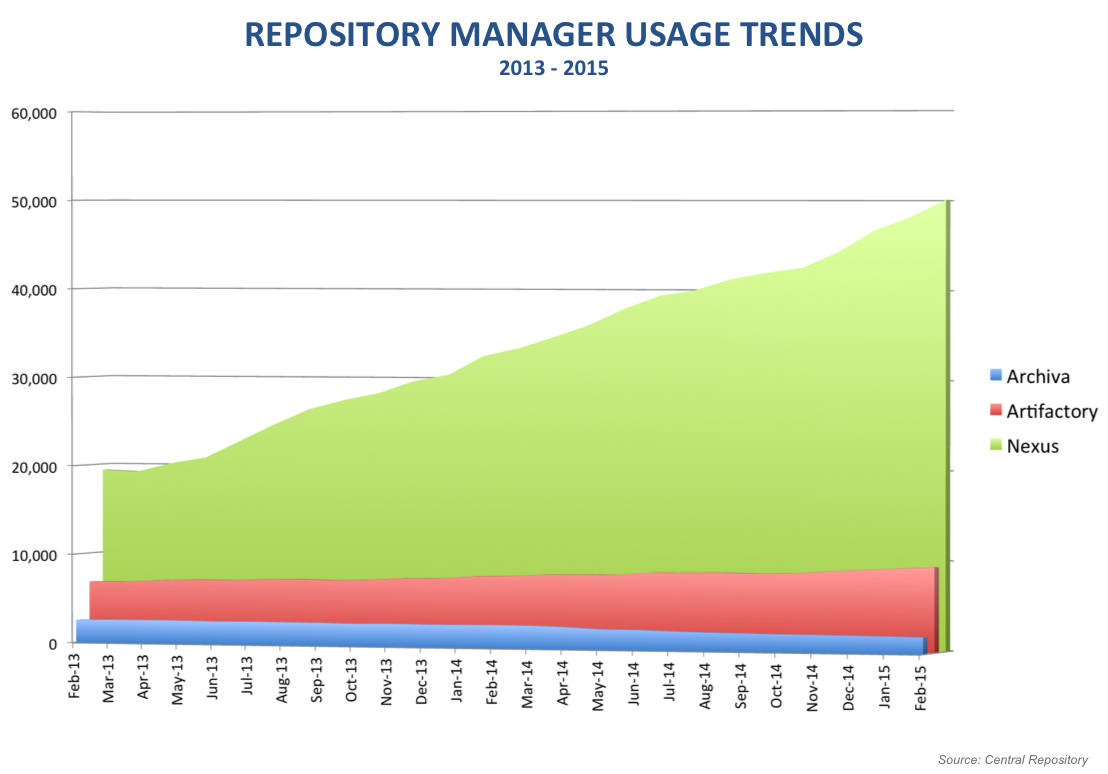 Active Nexus instances have grown 100% within the past 18 months. Just awesome. And, YOU, our user community made it happen. As of today, we surpassed the milestone of 50,000 active Nexus installs! Thank you.

With Nexus at the heart of everything continuous in software development, we are excited about all of the great work being done across our user community. We have enjoyed reading your blogs and tweets, viewing your presentations, and seeing TheNEXUS community grow. And while we continue to expand Nexus to cover more component and repository formats (npm, RubyGems, NuGet recently added to Nexus OSS ), we are thrilled to see our community contribute in new and innovative ways, including: Chef, Puppet, RunDeck, Docker, Gradle, Minecraft, and a host of other community developed plugins and integrations).

As we kick off 2015 with 50,000 Nexus instances, we promise you that we are not going to rest on our laurels. There are many great new enhancements coming to the Nexus portfolio in the months ahead. The release of Nexus 3 will be here before you know it, and our roadmap for this Spring has more cool functionality planned for you -- so stay tuned.

Another fun thing we have been doing in TheNEXUS community is introducing you to our development team. As regular contributors to TheNEXUS, they have shared insights about our agile development processes, intra-team communications, and approaches to managing developers. Intrigued? Well, on March 25th, they’ll be hopping onto a live webinar to share more about our processes, tools, and best practices. Be sure to join us.

Voodoo That You Do

We’re sure that you are doing some amazing things with Nexus, and we would love for you to share them with the community. If you have written or want to write a blog on your Nexus experience, we’d like to publish it in TheNEXUS community. One of the mantras we have is, “What is obvious to you is awesome to someone else.”

Got an idea? Join our team of external community contributors such as Arun Gupta, Damir Arh, Maarten Smeets, Gaurav Vashishth, and many more. You can share your existing articles, contribute one, or write a series. Send your ideas and articles here.

Also, did you know that we send Nexus t-shirts to all of the folks that share their love for Nexus on twitter? If you have 140 characters to share (be sure to use @Sonatype), we’ll send you one of our cool t-shirts featuring unicorns, rainbows and bacon.

As the stewards of the Central Repository, Sonatype is able to identify repository managers that are requesting components via the details captured in the server logs. Log data is then bucketed for each week of the year and analyzed to count the number of unique IP / User-Agent combinations for the three primary repository managers (Archiva, Artifactory and Nexus). Because these are caching repositories, there are days when no requests need to be made, so a daily aggregation would under-report. Additionally, because IP addresses can change, aggregating across too long a timeframe can result in over-reporting. The weekly timeframe still appears to mildly under report, but it is therefore also a conservative methodology and strikes the right balance.

The chart show 2013 – 2015 Repository Manager Usage Trends, is rather telling. The X-axis represents months since February 2013. The Y-axis is a four week moving average of the repository manager instance counts using the methodology outlined above. The mild variability from week to week stems from the caching effects of repository managers, which allow them to operate out of contact of Central for periods of time, occasionally not being counted in a given week.

The most common repository manager (5X the second most common, Artifactory) is Sonatype’s Nexus with 50,000 instances as of February 2015. It is also the fastest growing by number of active instances connecting to Central, seeing an increase of 100% since August 2013.