Nexus Intelligence Insights Sonatype-2017-0312: jackson-databind, The End of the Blacklist For our October Nexus Intelligence Insight we will return to a very popular component that has been both a blessing and a curse to developers around the world. We’ll cover a fundamental change to a default setting and how that change in ‘type’ may impact the security of your next open source project.

Before you read this post, you may want to review the ongoing issue with jackson-databind and Sonatype’s remediation guidance as a result.

For those who’d prefer a summary, the attack vector for this vulnerable component lies in the deserialization of untrusted data from improperly validated objects being provided as an input to an application. Should an attacker be able to influence the serialized object data and inject malicious code or logic into it, that code could wreak havoc in the application environment upon deserialization - from seemingly benign crashes to remote code execution to a total system compromise.

As mentioned in the previous post, Databind addressed the multiple deserialization vulnerabilities by using a “blacklist” approach, meaning the objects of restricted subtypes were not to be processed by the component for deserialization.

The String-Set "s" maintains a list of "nasty classes" which are known to cause security issues and are restricted from being deserialized. 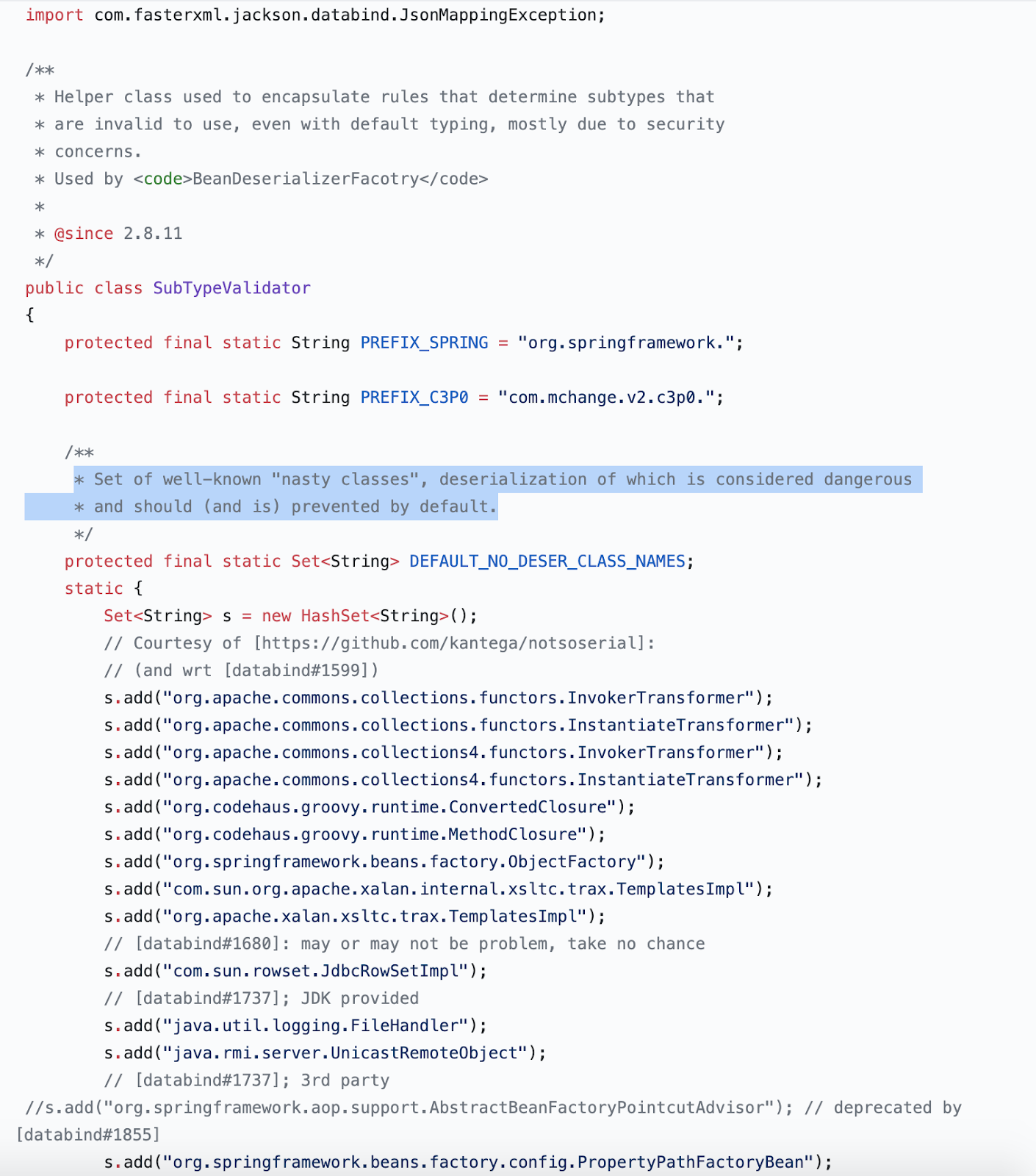 Consequently, the Sonatype data research team concluded all such “fixes” as partial or incomplete.

To reduce the scan noise for our customers, we continuously updated and revised the jackson-databind version numbers impacted by the “blacklist” fix, their associated CVE numbers (around 23 separate CVEs) and assigned a proprietary vulnerability number, sonatype-2017-0312 to cover new versions of Databind subject to the “blacklist” fix, but not already covered by a CVE, until a permanent fix was released.

Recently, the project released version 2.10.0 which is a sufficient, holistic fix for the deserialization vulnerability in jackson-databind. This most recent version release introduces a “whitelist” approach to the relief of everyone involved. 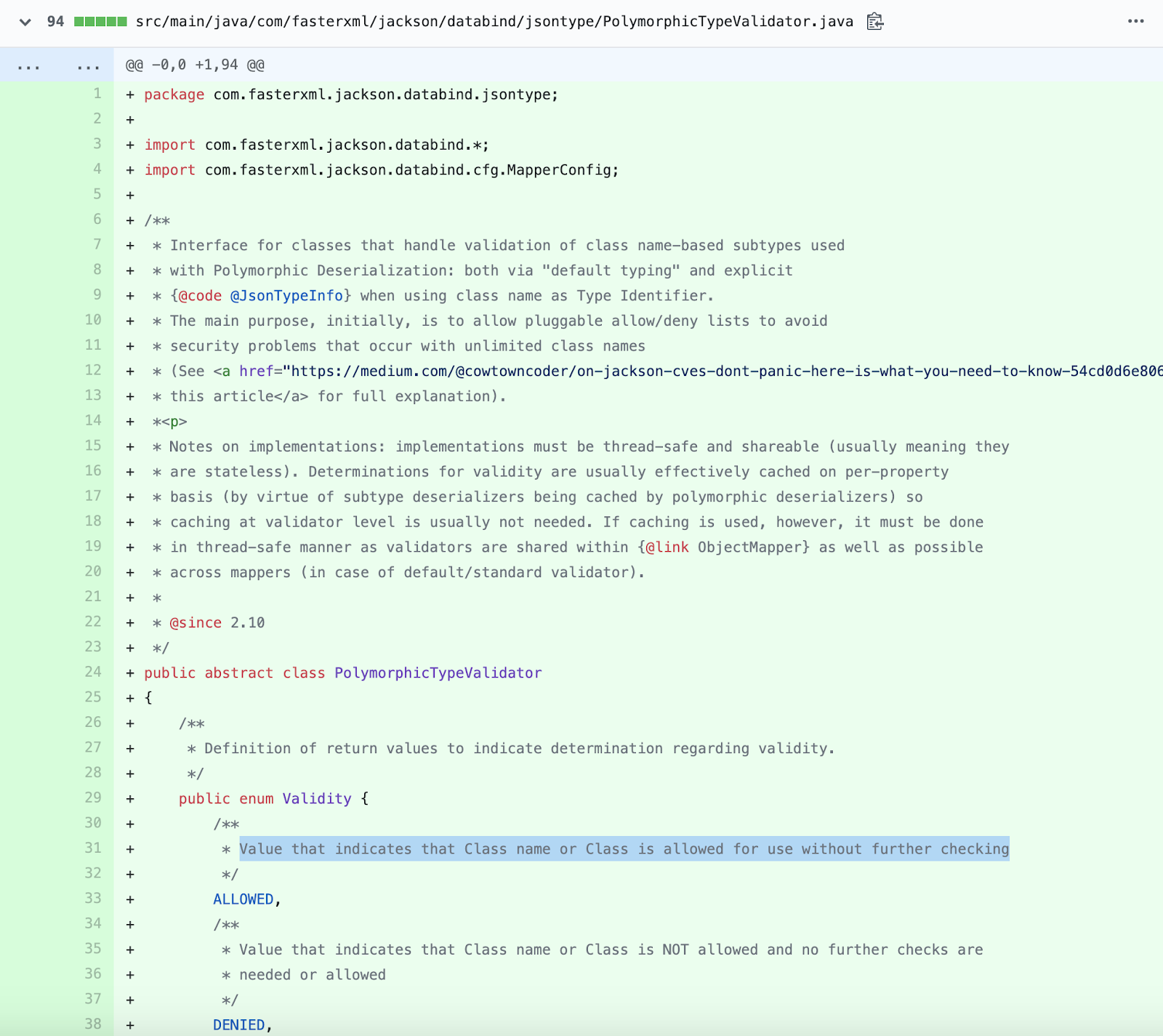 As the official release notes highlight, version 2.10.0 of the component now uses “Safe Default Typing” using the `activateDefaultTyping()` method as opposed to the deprecated `enableDefaultTyping()` method. This drastic improvement is especially significant in terms of basic, default security and remediation time when another component is blacklisted.

The new method introduced in the fix now requires the developer to explicitly specify what subtypes of classes are allowed to be deserialized, via `PolymorphicTypeValidator’. This means objects belonging to types other than those specified in the list would be safely ignored and untrusted deserialization no longer remains a viable possibility.

As of today, we recommend upgrading to at least version 2.10.0 of `com.fasterxml.jackson.core:jackson-databind`, as present in Maven Central, and changing any usages of `enableDefaultTyping()` to `activateDefaultTyping()` in order to mitigate this vulnerability.

For more information on jackson-databind:

DevOps-native organizations with the ability to continuously deploy software releases have an automation advantage that allows them to stay one step ahead of the hackers. Customers of Sonatype Nexus were notified of sonatype-2017-0312 within hours of the project being notified. Their development teams automatically received instructions on how to remediate the risk.

If you are a Sonatype customer and have additional questions about this component, its presence in a scan or a policy violation, please contact your Customer Success representative