npm Libraries ‘colors’ and ‘faker’ Sabotaged in Protest by their Maintainer—What to do Now? 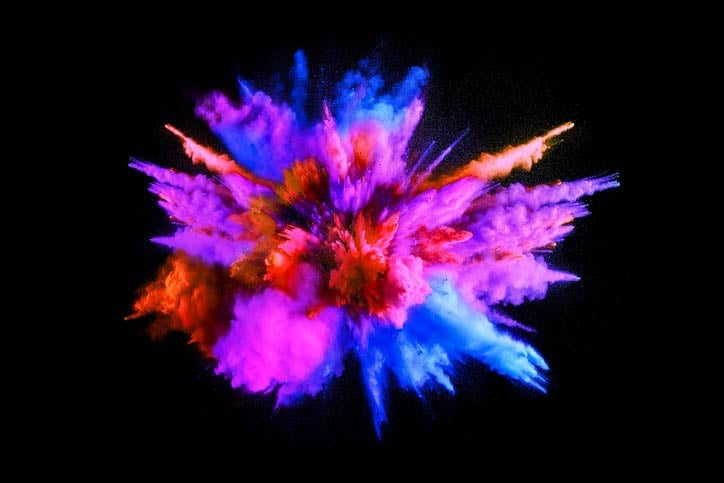 In what can only be described as one of the most bizarre events in the history of open source, we find that the massively popular open source libraries, colors.js, and faker.js were sabotaged by their very own maintainer, as I first reported on over the weekend.

To avoid any confusion, the GitHub project colors.js is known as simply ‘colors’ on the npm repository and has scored more than 3.3 billion downloads throughout its lifetime and has over 19,000 projects that depend on it. Similarly, faker.js exists on npm as ‘faker’ and has been retrieved 272 million times from the npm repository, with over 2,500 dependents. Both projects are developed and maintained by the same author, Marak Squires.

Note, hijacked versions of both projects were recorded as “malicious” in Sonatype’s data under identifiers: sonatype-2022-0215 and sonatype-2022-0216. The security data was made available to our customers the same day.

The immense download rate of these two components can be attributed to the basic, but essential, functionality they provide to JavaScript developers: ‘Colors’ lets you print colorful text messages on the console, whereas ‘faker’ helps devs generate fake data for their applications, for testing or staging purposes.

Many open source developers found themselves at unease yesterday after suspecting that these popular dependencies–’colors’ and ‘faker’ had been compromised. Given the recent ua-parser-js and coa/rc npm library hijacking incidents, such an assumption would have been reasonable, after mysterious ‘colors’ versions 1.4.1, 1.4.2, and 1.4.44-liberty-2 appeared on npm: 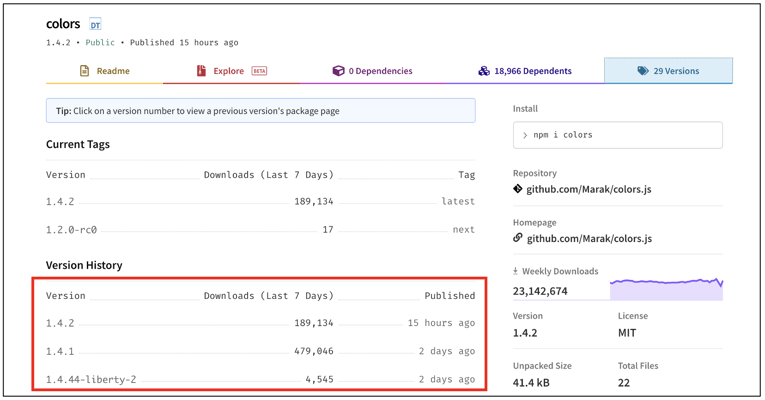 Those whose applications pulled this recently published ‘colors’ version found their applications caught in an infinite loop, printing ‘LIBERTY ‘LIBERTY LIBERTY’ followed by a sequence of gibberish non-ASCII characters aka Zalgo text: 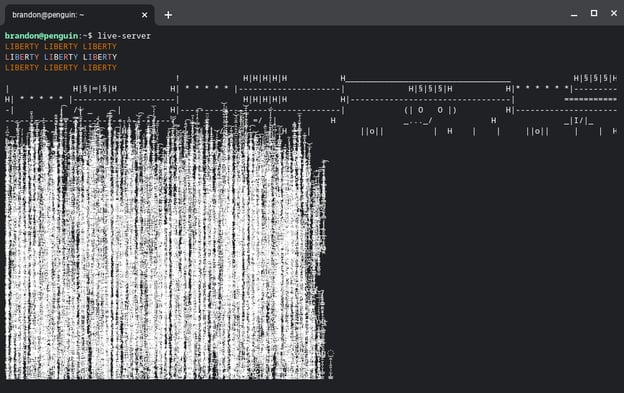 Developers contributing to well-known OSS projects, including Amazon’s Cloud Development Kit (aws-cdk), Facebook’s Jest, Javascripting project, and Node.js Open CLI Framework, were all impacted and expressed concerns as to if ‘colors’ had been hijacked.

“It's come to our attention that there is a zalgo bug in the v1.4.44-liberty-2 release of colors.

Please know we are working right now to fix the situation and will have a resolution shortly,” wrote the developer.

The culprit here, as verified by Sonatype, is the “American flag module” added by the developer in the aforementioned versions to print ‘LIBERTY’ text followed by the American flag: 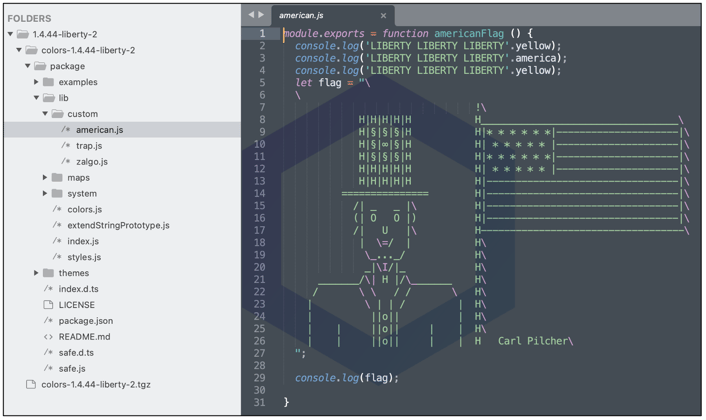 Whereas the infinite loop is introduced in the lib/index.js file (line 18) and keeps rendering the Zalgo text in the user’s console indefinitely:

Self-sabotage in Protest Speaks to the Open Source Sustainability Problem

Upon digging deeper, it turns out that the developer himself introduced an infinite loop in colors, thereby sabotaging its functionality, and purged the functional code from the ‘faker’ package in version 6.6.6. As of today, the front pages of both the latest npm version of ‘faker’ and its modified GitHub repository pose a provocative question: “What really happened with Aaron Swartz?”

For this protest, and since initially there was some confusion if the source of the problematic code was a project compromise, GitHub allegedly suspended the developer’s account. Although judging by the fact that GitHub account ‘Marak’ is accessible at the time of writing, the suspension appears to have been temporary.

On reaching out to Squires, I couldn’t get a definite answer as to what his motives were, but did come across a 2020 GitHub issue published by the developer.

In November 2020, the developer explicitly expressed an intention of no longer supporting big companies with their “free work” and that businesses should either fork the developer’s projects or compensate him handsomely with a six-figure annual salary: 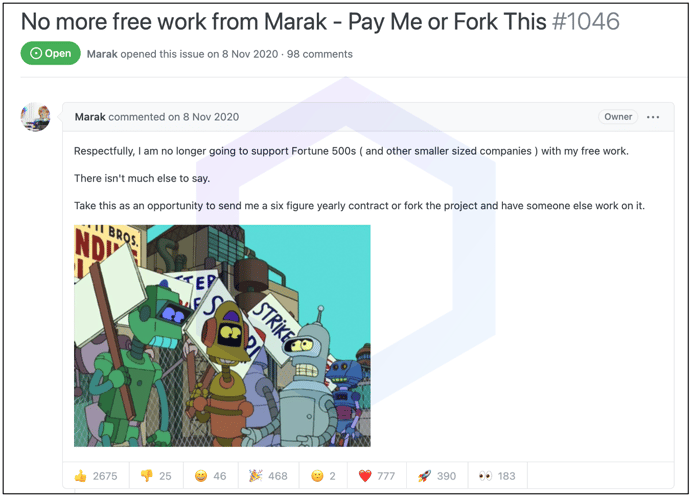 Moreover, the commit history of ‘colors’ and ‘faker’ seen by us also indicates these changes are intentionally pushed by the developer to push people to either fork the projects, resolve the bugs themselves, or support the open source developers that are largely volunteers, sustaining critical projects in their free time.

The incident draws attention to the issue of the Open Source Sustainability problem that GitHub has previously written about. Moreover, the incident follows the notorious Apache Log4j debacle that led to Log4j’s already understaffed development team of volunteers to work extra hours over the holidays as many more CVEs kept coming up, despite not all of them being worthy of attention.

The log4shell mass exploitation and the Log4j maintainers having been burdened with the responsibility of delivering urgent patches raised concerns as to how mega corporations extensively depended-on open source projects but did not give back enough to support the volunteers behind these projects. Subsequently, some casual bug bounty hunters and researchers may have been caught unnecessarily hounding already-spread-thin Log4j maintainers with insignificant flaws in a quest to enrich their “CVE portfolio,” rather than report legitimate vulnerabilities that merited attention.

“Log4j maintainers have been working sleeplessly on mitigation measures; fixes, docs, CVE, replies to inquiries, etc. Yet nothing is stopping people to bash us, for work we aren't paid for, for a feature we all dislike yet needed to keep due to backward compatibility concerns.”

Interestingly, despite many not agreeing with Marak Squires’ bold move to sabotage his own projects, many have sided with him with one tweeting:

Developers using 'colors' and 'faker' npm projects should ensure they are not using an unsafe version.

Thankfully, within hours of GitHub reports on the anomalous behavior exhibited by ‘colors’ and ‘faker,’ Sonatype’s security products began displaying “Malicious Code” warnings to any customer who may have pulled the sabotaged versions: 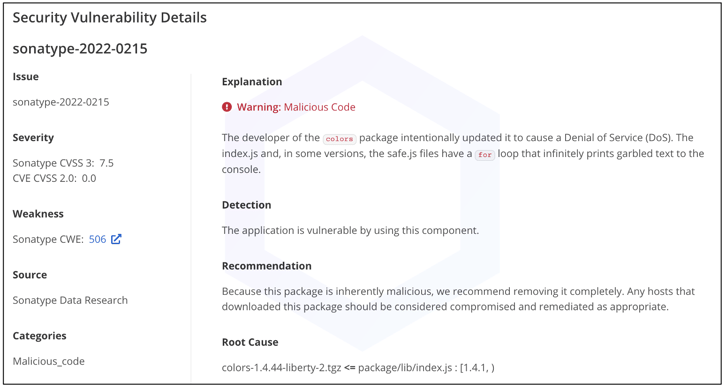 For those not using Sonatype’s products powered by next-generation Nexus Intelligence, downgrading to an earlier version of colors (e.g. 1.4.0) and faker (e.g. 5.5.3) remains a solution.

It's also a good practice to pin your dependency versions to a specific, trusted version rather than automatically pulling in the latest version, without automated security checks in place to catch malicious releases. For example, here's how Amazon's aws-cdk project has achieved this.

If you are using Sonatype Lift, you can log into the web console and click Analyze Now on any repositories of concern. Lift will report usage of all vulnerable versions of Log4j. Install now.

Finally, even if you aren’t using any of Sonatype’s products, Sonatype offers a free vulnerability scanner scanner you can download or use online. The report will detail usage of all vulnerable versions of Log4j in your repositories.