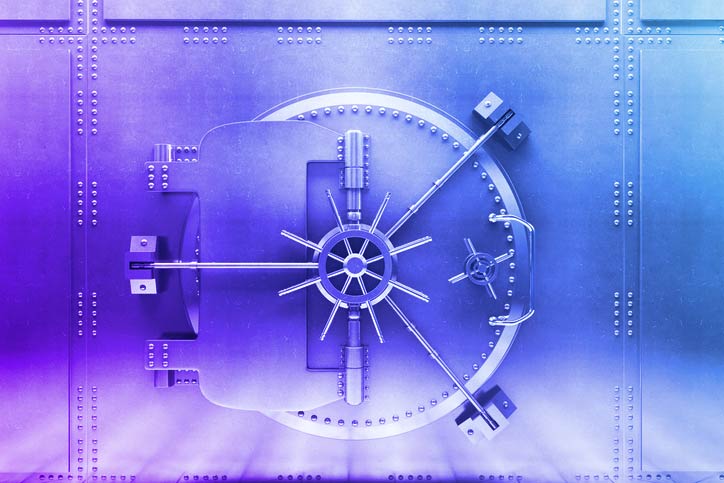 What an exciting first post, I’m sure. But it’s what I’m working on, I suppose.

The Plan
Okay, so – there should be three groups. Admins, Developers, CI.

Admins Should be able to modify every aspect of the repository.

Developers Should be able to pull artifacts from the private repository.

Continuous Integration Should be able to push artifacts to the private repository.

The Goal
I believe I’ve already said it, but I’m no system administrator. The only goal I particularly have in mind is to ensure that we have a private repository for proprietary software that our developers can grab artifacts from when necessary.

This sounds easy, but I still have nightmares from Nexus 2 a few years ago.

Let’s put it in practice…
Alright, then.

So first things first, my System Administrator (<3 Luke) already set the system up itself, and connected it to LDAP. So I can ignore those two bits. I think, for once, he might have gotten the easy job.

Secondly, I’ve gone to Security -> Anonymous and disabled access for anonymous users entirely. This won’t ever be a public server, so there’s no use in any kind of complicated system.

The next thing I need to do is make sure to assign a role to LDAP users when they sign-in for the first time.

The answer I was looking for was “Role Mapping”. All You have to do is go: Roles -> Create role -> External role mapping -> LDAP (Or, presumably, whatever you’ve named your LDAP on Nexus. My System Administrator isn’t particularly original. A few names come to mind off the top of my head: AutoJoin Doomslingers? No?

That was easy enough.

You’ll notice that I’ve left the granted privileges out of the screenshot. I’m not being particularly sneaky, or anything, I just have absolutely no idea how to work them at the moment and I have yet to create the private repository anyways, which we’ll cover next.

Anyways. Now that my users will be mapped to that group when they join, let’s actually create the Private Repository.

Creating the Private Repositories
I think this part should be easy enough – even for me. 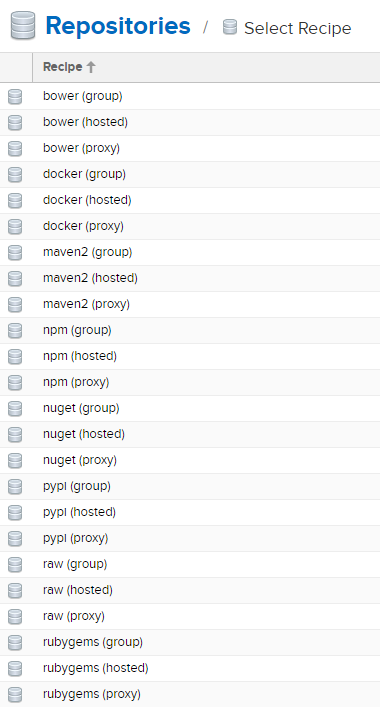 I… instantly said that too soon. I actually laughed when I typed that sentence, when to add a new repository, and this was the first screen to present itself to me.

So, obviously, we’re sticking with Maven2. We’re Java developers, and I have no interest in the other recipes. At least, at the moment.

I’m assuming (without looking this up) that hosted is the type we’ll want. 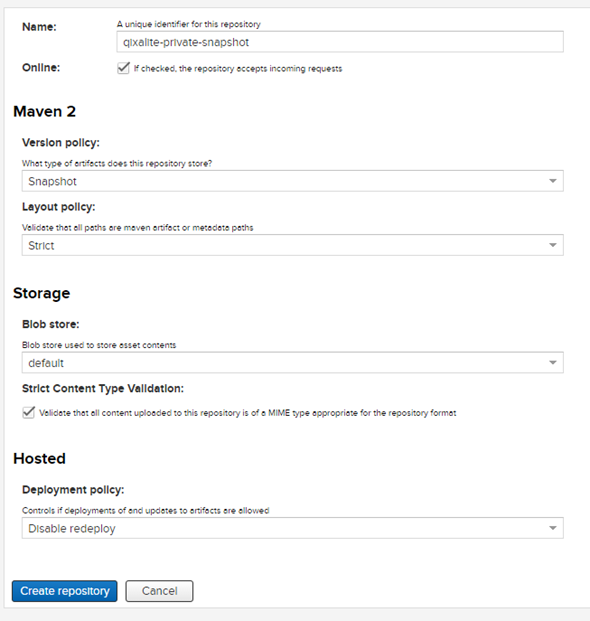 Until I learn I should be doing differently, I’m going to go ahead and leave pretty much everything as default, minus the Version policy. I’ll go ahead and create a twin-sister repository just like this one for qixalite-private-releases.

Now I’ll create a group for them, so they can both be referenced. How we factor the request will determine which is returned, I think. 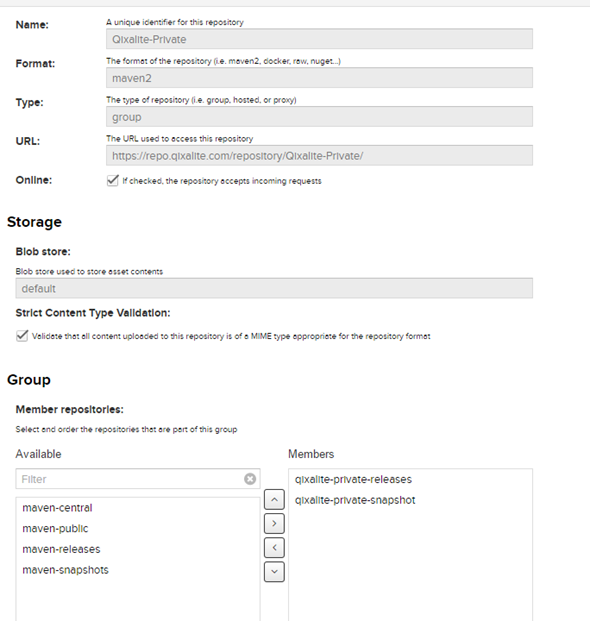 Giving Privileges to Developers
Alright – so now that the repositories are created, it’s time to assign them some privileges, allowing them to read/write from the repositories.

If there’s one thing I’ve learned, though, it’s that there are a trillion-and-a-half permissions to scroll through. Luckily enough, I know enough from Nexus 2 on how to properly filter to find what I’m looking for.

One nx-repository-view-* later and I’m golden.

I didn’t give them much because, frankly, our CI will be doing most of the hard work.

Setting up the CI account(?)
You’ll notice I left a (?) up there. Mostly because I have absolutely no idea if I’ll be giving the CI an actual account or if I’ll have a general key for pushing to repositories. I’m… really not sure how I want to play this, yet. 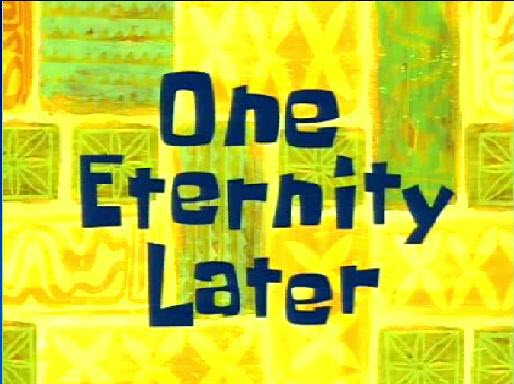 I think it’s safe to say that the easiest option is to setup our CI with a username/password to be configured on the server itself. I’m… not entirely certain how Remote User Tokens work and it sounds exhausting. Sorry.

So… create the role. 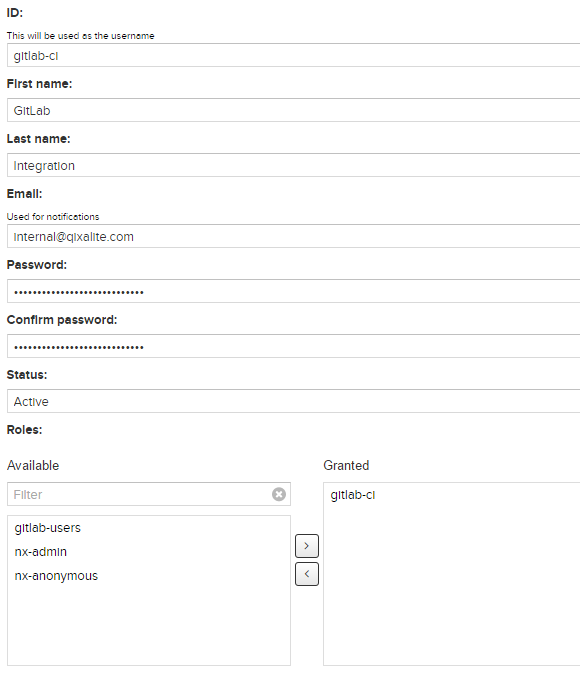 And, finally, create the group.

That was easy enough.

With that bit, anyways…

Now we need to configure the project.

Configuring CI to Use the New User
Alright, let’s open GitLab and grab our Project. This part is simple enough, I suppose. Project -> Settings -> Variables

Configuring the build.gradle file
Getting the username/password for building is easy enough.

Now onto the deploy script. Also not that hard. I’m back in familiar territory!

Feel free to ignore the big yellow warning block. The day I get gradle to allow anything past Closure is the day I’ve died and gone to heaven. At execution it should be fine.

Alright. Last bit, before we test a deploy.

Configuring repository as password protected (gradle)
We’re back at the build.gradle for this. I’m actually just going to paste this code block, because there’s no way to make the image pretty.

That should be all she wrote, there.

Whoops! Forgot to modify my .gitlab-ci.yml

NOW Let’s do some testing!

Test One (Fail)
Alright. Let’s push these changes to master.

I hope my fellow developers don’t kill me in my sleep for making master a commit ahead, but I’m sure they won’t mind the merge issues.

It looks like GitLab-CI doesn’t pull over SSH. Interesting.

Test Two (Failure)
And we’re back! Let’s try this again.

I had Luke, my system admin, go ahead and re-enable HTTP access to repos. You still need a username and password, but it’s not a big deal at least while we’re testing things (and fixing that problem isn’t within the scope of this blog post).

Turns out I didn’t need Google, after all!

I forgot to add a URL for my repository.

Unauthorized, huh? Maybe I set something up wrong… Lemme take a look…

I misnamed the variables from all that time ago. Whoops.

Test 6 (Fail)
So I think I found it. Or, rather, Luke – my system administrator – found it.

So we’ve changed these to these, which should work:

Test 7 (Success!!)
BUT! It’s progress. Now we’re “Forbidden”, not “Unauthorized”. Which means I setup the roles for the gitlab-ci user wrong.

I think, before, I was too stingy on the perms. I’ve gone ahead and given the gitlac-ciuser every nx-repository-view permission. This should be acceptable. 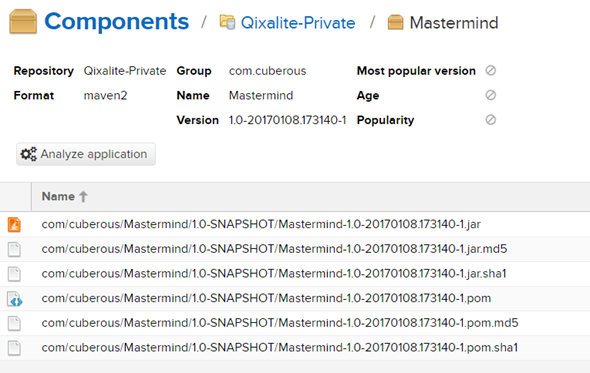 Well, I suppose that does it. Hope you, whoever you are, enjoyed the journey.

Thanks for the help, Luke.

Nicholas Badger is a software developer based in the United States who's been working with Java and other C-styled languages for over 5 years.